Pacing one’s self for the slog that is writing 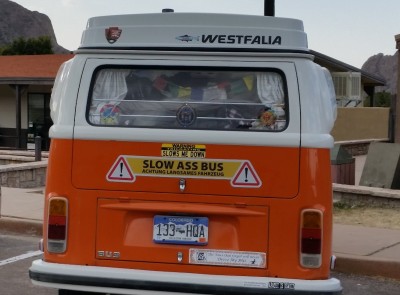 I took this photo in the parking lot of a visitor center in Big Bend National Park, overlooking a pitched, red rock valley in the Chisos Mountains. That’s in the central Chihuahuan Desert, on the Texas/Mexico border.

Before photographing the bus, I asked permission from its driver: a young, clean cut, single dad. His sole passenger was his blonde, curly-mopped 4-year-old daughter, whom he told me he was planning on homeschooling. In fact, he’d already started.

All that paraphernalia crammed against the glass behind the Tibetan prayer flags? Camping gear and loads of books and school activities. With his one pupil, he was less Captain Fantastic and his brood, more Captain Earnest and his skipper. I wished him luck, confessed my solidarity, warned him of the pitfalls ahead: I had homeschooled my own son, on my own, until I ran out of gas: Even slow ass buses need fuel.

Why I homeschooled and then didn’t is its own story, but ultimately, I learned that when the details of a plan aren’t clear, it’s best if you take the long view. I put my son in public school, which hadn’t been my intention, but in the end, realized we’d still get where we were going. The destination was to raise a highly functioning adult, which evidently — now that my son lives on his own, is gainfully employed, in a solid relationship, and has a hobby he loves — I have.

Looking back, the journey went too fast. In reality, it was a slow, steady climb up a rocky road, yet with a beautiful — sometimes achingly so — view.

Works that endure, such as what our children (if we have them) learn from us, such as our bylines, novels, poetry collections, are works that take time to create. Similarly, when we can create something of value in quick fashion, isn’t that just because of all the time we took to learn how to do what we do well enough that it has become reflexive?

Slow ass bus. It’s what I feel like after sitting at my computer for days on end trying to make a book deadline, when I know that two days later, I’ll have a new project starting, and then another. No time to refuel; it makes me nervous. But in reality, I am taking in the sights and making great time because I am skilled at the slog. I know the pitfalls of wanting to push on before I am ready, or of lingering when the light is dimming and I’d best be headed for cover.

The key to it all: filling my tank along the way with sips of beauty and conversation with strangers. 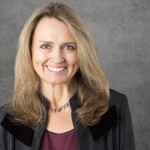 Whitney Fishburn lives in Chevy Chase where she publishes and podcasts at documental.substack.com