Whatever Happened To Walter Lord?

The Making of an Historian

In 1926, Walter Lord, nine years old, persuaded his mother to cross the Atlantic aboard the Olympic. The choice was no accident; the Olympic was sister ship to the Titanic. Already doomed, the White Star liner sailed in and out of young Lord’s imagination. The following year, he wrote and illustrated an account of how the Titanic sank in the early morning hours of April 14, 1912 with the loss of more than 1,500 lives. Classmates at the Gilman School in Baltimore, and later at Princeton and at Yale Law School, as well as colleagues in the Office of Strategic Services during the war, and even associates in his post-war jobs in journalism and advertising remember Lord’s fascination with the disaster. In retrospect it seems inevitable that the Titanic would be the subject of his first foray into book-writing. In July 1954, while a copywriter at J. Walter Thompson, he proposed the book to his friend Howard Cady who was an editor at Henry Holt Publishers.

“The whole book will be limited to the eight hours between the time when Lookout Fleet sighted the iceberg and the time when the last survivor climbed onto the deck of the rescue ship. Everything else can be woven in. Minute by minute, the reader will live with the ship’s company during her last breathtaking hours and when he finishes, the reader will go on his way, knowing well that in the words of the title—here was A Night to Remember.” Amazingly, not one book had been written about the Titanic since 1914.

Lord focused initially on testimony given to the United States Senate and to a British Court of Enquiry into the tragedy. Then he tracked down survivors through letters-to-the-editor in newspapers across the U.S. and Britain. In his text he “salted in” survivors’ accounts, creating what one reviewer called “a kind of literary pointillism.”

A Night to Remember was an immediate bestseller, bringing him another contract, this time for Day of Infamy, a book about Japan’s surprise attack on Pearl Harbor on December 7, 1941. One of Lord’s important contributions to this subject was his exploration of the Japanese perspective. He also sent out a detailed questionnaire about the attack to which he received more than 1,000 responses. The use of questionnaires became key in the Lord modus operandi.

“In trying to reconstruct the attack, in trying to tell the story ‘the way it really was,’” Lord wrote, “I found myself using official records, especially the 40 volumes of the Congressional investigation, action reports, published accounts, ships’ logs, diaries, journals, letters, questionnaires, and interviews. I called it the ‘Mrs. Murphy’s Chowder Approach.’ Everything went into it. The truth might be lurking somewhere in any or all of these sources. My biggest job was finding the courage to weed out and not use some very good material.”

When Day of Infamy topped the bestseller list, Lord realized he could make a living as a writer. He had taken a totally new subject—one about which he knew relatively little—and with exhaustive research, turned it into a vivid story that told people a lot more than they might have expected. Neither was it that the Lord approach merely tells all about the battle, but shows from several points of view how human nature behaved in crisis.

Lord honed this eye-witness approach to history, to perfection whether writing about the defense of the Alamo in A Time to Stand (1961), or the skirmishes over the admission to Old Miss of James Meredith in The Past That Would Not Die (1965), the Battle of Midway in Incredible Victory (1967), the Coastwatchers of the Solomon Islands in Lonely Vigil (1976), or the evacuation of allied troops from French beaches in May 1940 in The Miracle at Dunkirk (1980).

In 1972, Lord developed symptoms of Parkinson’s disease after publishing The Dawn’s Early Light, about the War of 1812. The illness slowed his output yet he went on to write three more books, including a second book about the Titanic, The Night Lives On (1986).

Walter Lord wrote 12 books in all—short page-turners packed with compelling recall from every point of view—using techniques that made history come alive and that shaped the way popular history is written today. He died in 2002.

A forthcoming memoir, The Way It Was: Walter Lord on His Life and Books, will be published in January, edited by Jenny Lawrence, a freelance editor and writer based in New York City. 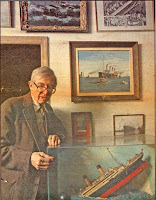