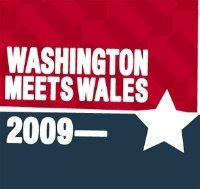 Totally cool is this mention of The Writer’s Center (this event) on the BBC. Check it out here.

Tom Anderson was led into a writing career through journeys taken as a surfer. He studied at the University of Glamorgan, South Wales and was the recipient of an Academi writer’s bursary for 2007 for his next book, a travelogue set in the USA. Tom’s main area of interest is travel, and he has had articles published in several publications. His book Riding the Magic Carpet: A Surfer’s Odyssey to Find the Perfect Wave (Summersdale Publishers Ltd) was published in 2006.

Catrin Dafydd is an author, dramatist, poet, political campaigner, performer and musician. Catrin graduated in Welsh from the University of Wales, Aberystwyth. She won the 2005 Literature Medal at the Urdd Eisteddfod, Cardiff and has won 2nd and 3rd places in the Crown, Chair and Drama Prize competitions 11 times in five years. Catrin won an Academi bursary in 2004 to work on her first novel, entitled Pili Pala (Gomer, 2006). Her first novel in English, entitled Random Deaths and Custard (Gomer, 2007), was nominated for the ‘Books to be talked about 2009’ award by the World Book Day team.

Novelist and singer-songwriter Fflur Dafydd is a graduate of University of East Anglia’s Creative Writing MA course. She was selected in 2005 for the high-profile Scritture Giovani project for emerging European writers, and has undertaken residencies in Helsinki, Finland and on Bardsey Island, Wales. Fflur has a PhD on the poetry of R.S. Thomas and currently lectures in Creative Writing at Swansea University, south Wales. Fflur was awarded the Prose Medal at the National Eisteddfod in 2006. She is the author of two Welsh language novels and one English novel, Twenty Thousand Saints (Alcemi, 2008).

Poet and academic Eurig Salisbury was born in Cardiff, Wales and later moved to Carmarthenshire. He is currently a Research Fellow on the Poets of the Nobility Project at the Centre for Advanced Welsh &amp; Celtic Studies in Aberystwyth. At the age of 13 he taught himself the craft of cynghanedd – the ancient, but still very popular, strict-metre verse form in Welsh. He won the Chair in the National Urdd Eisteddfod in 2006, and has come second in the Chair competition at the National Eisteddfod of Wales on three occasions, in 2006, 2007 and 2008. Llyfr Glas Eurig, his first collection of poems, was published by Barddas in 2008.

Owen Sheers was born in Fiji in 1974 and brought up in Abergavenny, South Wales. He was educated at King Henry VIII comprehensive, Abergavenny and New College, Oxford. The winner of an Eric Gregory Award and the 1999 Vogue Young Writer’s Award, his first collection of poetry, The Blue Book (Seren, 2000) was short-listed for the Welsh Book of the Year and the Forward Prize Best 1st Collection 2001. His debut prose work The Dust Diaries (Faber 2004) was short-listed for the Royal Society of Literature’s Ondaatje Prize and won the Welsh Book of the Year 2005. In 2004 he was Writer in Residence at The Wordsworth Trust and was selected as one of the Poetry Book Society’s 20 Next Generation Poets. Owen’s second collection of poetry, Skirrid Hill (Seren, 2005) won a 2006 Somerset Maugham Award. His first novel, Resistance (Faber, 2008) was short-listed for the Writers Guild Best Book Award and is translated into nine languages. Owen was a 2007 Dorothy and Lewis B. Cullman Fellow at the New York Public Library. He currently divides his time between New York and Wales.

Rose Solari is the author of two full-length collections of poetry, Orpheus in the Park, and Difficult Weather, and two chapbooks. Her poems have appeared in many journals here and in the U.K., including Parnassus, Gargoyle, Poet Lore, The Mississippi Review, The Potomac Review, and Nth Position, and her poetry and prose have appeared in several anthologies, including American Poetry: The Next Generation; Enhanced Gravity: More Fiction by Washington Area Women; and Women: Images and Realities, A Multicultural Reader. Her other honors and awards include the Randall Jarrell Poetry Prize (selected by Philip Levine) and, in 2007, her third Maryland State Arts Council Individual Artist’s Grant. She has taught at the Writer’s Center for fifteen years, and joined the board of directors there in 2006.