Uncovering Family Secrets: an interview with Eliza Nellums, author of All That’s Bright and Gone

All families keep secrets, some more dreadful than others. Family secrets masterfully intertwine with ambiguity and mystery in Eliza Nellums’s debut novel, building a scarce and dazzling narrative told by a six-year-old girl with a vivid imagination. Nellums’s talent sparkles on the page, capturing the essence and voice of six-year-old Aoife. 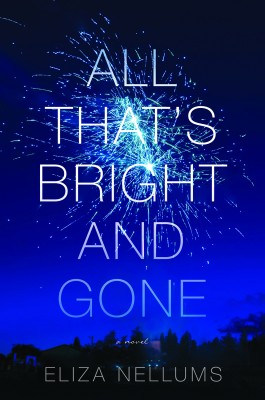 Set in the suburbs of Detroit, All That’s Bright and Gone tackles themes of grief, love, and mental illness, where Aoife wants to understand why her mom is confused and institutionalized; a confusion that started after Aoife’s older brother’s death. A brother Aoife doesn’t quite remember, only reminded of his existence by the photo that hangs on the wall. Realizing the only way to get her mother back home is by solving the mystery of her brother’s death, Aoife embarks on a journey through her family’s dilemmas and chaos she doesn’t entirely grasp. As she gathers clues and interrogates suspects, Aoife attempts to navigate the grown-up world with the help and sleuthing skills of her wannabe-detective neighbor, Hannah, and the guidance of Teddy, Aoife’s imaginary
friend.

Nellums mentions that her first draft was written quickly “maybe in two weeks,” she says. “I think that gives you the ability to really get into a character’s voice. Of course I had a lot of editing to do (coming up on five year’s worth of editing…).” The author, an alumna of The Writer’s Center, credits her Power Plotting class at TWC with Kathryn Johnson as a huge help finishing her first draft. We talked with the author ahead of the release of All That’s Bright and Gone (December 10, 2019 from Crooked Lane Books).

What’s your inspiration behind this novel?

Watching my sister’s children grow up, I was struck by how much personality they had at a much younger age than I would have expected—by three or four years old they already had goals and a unique sense of what they wanted from the world. I began trying to write a book with the youngest narrator I could imagine, just to see if I could do it. Originally the main character was going to be four. But good thing I didn’t stick with that idea, since it had actually already been done (in Room by Emma Donoghue) and six years old is probably a little easier!

Are there any particular writers who you’d say have influenced your storytelling?

This book was inspired in part by Mark Haddon’s The Curious Incident of the Dog in the Night-Time and Alice Sebold’s The Lovely Bones. I had already finished a draft of my novel before I read the book Room, but that helped me during revisions. My agent suggested I read the Flavia De Luce series by Alan Bradley, which I think also made the book stronger during revisions. More generally, Annie Dillard’s observations about small elements of the natural world was probably the first writing that really made me sit up and take notice.

How did your own experience inspire the journey of six-year-old Aoife? 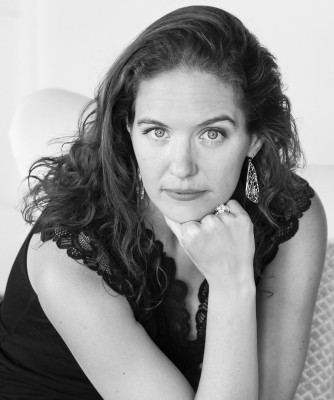 I feel obliged for the sake of my family to mention here that they are very lovely and not at all like the somewhat difficult Scott family! That said, I did grow up in the Detroit suburbs, where the book is set. And I mean, we were all children once. Writing this book was almost like experiencing a second childhood for me. I was always begging my parents to remind me of what I cared about at that age.

Your novel is sprinkled with mystery elements that make the reader turn the page and root for Aoife. How did you decide where to drop the page-turner surprises in the story?

Thank you! I’m a big fan of the outlining framework in Story Engineering by Larry Brooks. It divides a plot into quarters and talks about what needs to happen in each part. Breaking it down that way made a novel far more manageable for me, because each section really has its own arc, and it hopefully gives the reader a sense of energy and movement. Similar suggestions exist in Save the Cat, which is aimed at screenwriters but easily adaptable to the novel, and is very readable.

“Being confused” was used as a way to interpret mental illness. Can you talk a bit about how mental illness plays an important role in All That’s Bright and Gone?

I wanted to write about things that our narrator isn’t really capable of understanding, and I think the medical explanation for mental illness falls into that category—of course a six year old can’t really comprehend the vagrancies of brain chemistry. But Aoife’s also at the age where she’s trying to sort out the rules of reality, and in her case there’s a lot of wiggle room, partly because the family is very religious, partly because her mother has mental illness, and partly because her world is full of imaginative stories as well as childish misunderstandings. So there’s a parallel there to what her mother is working through at the same time, coming to terms with the fact that she can’t always trust her own perceptions. They’re both trying to navigate the question of what is real at the same time.

Your novel is scattered with moments when adults talk to kids and avoid having important conversations such as death, parenthood, sexual orientations, and more. Can you talk a little bit more about why it was important to tackle this lack-of-explaining to children?

Part of the story I wanted to tell was about how children fill in the blanks themselves when they don’t get reliable information from the adults in their lives. In this book, there are some dark secrets that the grownups are hiding, and it makes sense in some ways that they want to protect Aoife from them because she’s so young. But what we forget, as adults, is that children aren’t stupid and they know when something is terribly wrong, and they will try to figure it out, and we probably won’t like where they end up. In the end trying to hide the truth rarely protects anyone except maybe ourselves.

Tell us about your publication journey as a debut author.

I am really an outsider to publishing. I didn’t finish a novel until I was 30. I was writing during my weekends and vacations but I didn’t know anything about the industry, and I wasn’t really finishing anything. Then I moved to DC and was lucky to join a really great writing group, who held me accountable for finishing projects as well as forcing me to consider the reader’s experience when I wrote. I finally finished a novel, queried it for over a year and couldn’t get an agent—but by then I had started the draft for All That’s Bright and Gone. I met my agent at the NYC conference Thrillerfest, which I saved up over a year to attend. I pitched him the book at their Pitchfest, and the rest is history. To be honest, it all still seems like a dream.