Since 2002, executive editors Jody Bolz and E. Ethelbert Miller have curated the literary work of each book-length issue of Poet Lore, America’s oldest poetry journal. Once the poems, essays, and reviews are all in place, a critical facet of their work is finding the perfect cover image—a photograph that both suggests the discoveries that writers make between the journal’s covers and stands alone as a compelling piece of art: a photograph that asks its own questions and makes its own claims.

The breathtaking image on the cover of the journal’s latest issue (Fall/Winter 2017) was taken by photographer Ariel Body in an iconic location called “The Wave” in Coyote Buttes, Arizona. Each wave of canyonland is as uncanny and vivid as something painted by Salvador Dali’s hand. The photograph is a sublime portrayal of a desert setting—one that, on the one hand, humbles and energizes, and on the other hand, intimidates and threatens. As a point of entry to the new issue’s poems, it resonates with themes of place and displacement: border crossings both literal and figurative.

Curious to learn about the image’s back story, I asked Body to share her path through photography. Body, who is a climber and a self-described “adventurer” herself, said she has long been enthralled by the concept of “tiny people in epic spaces.” Photography, for her, serves “as an avenue to travel”—to “expose viewers to places and ideas they may have otherwise missed.”

“Working as a self-employed visual communicator over the past decade,” she said in an email interview, “I have had the flexibility to work and shoot in over a dozen countries and experience some truly unique places (including shooting a sled-dog race in back-country Alaska, an adventure project in Chile, a real-estate project in Mongolia, a sports project in Australia, and recently, an adventure travel project in Kenya.”

The cover photo on Poet Lore’s latest issue is one of her earliest works, taken when she had just obtained her first professional camera and was seeking a highly coveted permit to hike in The Wave. (She has been unable to obtain a permit since her visit a decade ago.) 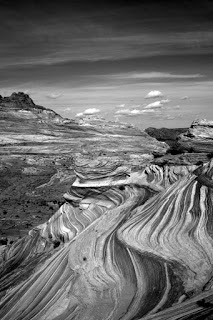 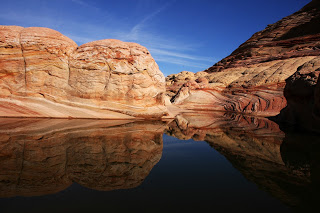 Body took the above photos during the same trip to The Wave as part of her study.

“This particular photo was part of a photographic study emphasizing place…. [T]he goal was to create a set of images that fully encompass the space.”

Asked why the theme is important to her, Body said: “I think a lot of times places aren’t as spectacular in photos as they are in real life, so I’m totally drawn to this method as a way to show that juxtaposition and really emphasis the relationship of people in these spaces.”

To see more of Ariel Body’s work, visit her website.

Ariel Body is a desert-dwelling photographer, graphic designer, and coffee drinker. With a goal of working, climbing, and skiing on every continent, she continues to design and shoot projects around the world. She is currently self-employed as a freelance visual communicator, exploring innovative ways of visual storytelling. Her photos have been featured in print magazines and online.