The Art of the Debut: An Interview with Kayla Rae Whitaker 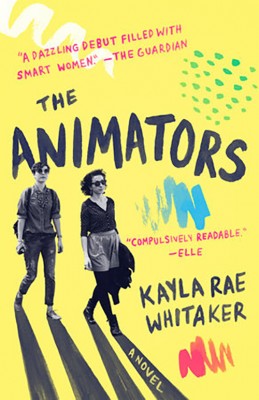 Grace Mott: I loved your book, and I’ve read a lot of reviews and summaries, but how would you describe THE ANIMATORS in your own words?

Kayla Rae Whitaker: THE ANIMATORS is about a friendship. It’s about two women who make things for a living, but who also, in a sense, make their work for one another, lobbing their stories back and forth. The story of Sharon and Mel is one told through the lens of what they make. Not only do they occupy a shared work life, they occupy a shared creative life, which renders the friendship more a marriage than anything else. As the writer, I revel in their ability to choose that life for themselves, come what may. And a lot comes for them.

As someone who watches a lot of cartoons, it was fascinating to read about Mel and Sharon’s creative processes while working in their studio. What was your inspiration for writing about cartoonists specifically? What influenced you?

Writing about a partnership was a pleasure, precisely because my own work life is often so isolated. And writing about an art form I love so much, in spite of my own lack of talent in that area, was a bit of a bitter pleasure. This whole book was, in essence, an elaborate fit of professional jealousy, written with my nose pressed up to the glass. I suppose it was largely informed by cable TV,  which, in rural Kentucky in the late 80s/early 90s, felt like a revelation, my first real brushes with art. MTV’s Liquid Television—not to mention those amazing bumpers that served as the transition between commercial blocks and scheduled programming—was a huge influence, as was Nickelodeon, as was The Simpsons, the first season of which aired when I was five.

Can you give us some background on where you come from and how you became a writer? What was memorable about your journey?

I grew up in Eastern Kentucky, in a small town in the Bible Belt. I was terrible at school—hated school, in fact—and so threw myself into books, and television, and my imagination, at a young age. I learned more from The Simpsons than I did from actual school. I was happiest inside my own head. In this way, I was a writer from the very beginning, but I didn’t know that for many years. I did not believe that “being a writer” was something people did in real life, for an actual living. I certainly didn’t know any writers, growing up. But I wrote every day, keeping a journal, trying short stories, because it made me happy. I was fortunate enough to receive a scholarship to go to college, something a lot of people don’t get the chance to do, and I felt a bit of pressure to take a practical career route. I ended up applying for MFA programs on a whim, while miserably studying for the LSAT. I followed my gut. That decision could have turned out badly, I suppose, but it didn’t.

What surprised you about the process of writing this novel? Did any scenes or chapters stand out to you as you wrote them?

THE ANIMATORS was actually the second novel I wrote. My first novel was my MFA thesis at NYU. That thesis taught me how to write a book. THE ANIMATORS taught me how to revise a book. THE ANIMATORS required five solid revisions, in total. In retrospect, each edit was a craft lesson: cutting for plot momentum, staging and framing scenes, sharpening character through dialogue. At one point, I wrote an ending I scrapped completely. It was a great flub. The book became better for my failed ending. It required slogging through an overhaul, but the book, over the course of that overhaul, became itself. Good writing is really editing. Failure is a harsh teacher, but it’s one of the best teachers imaginable, particularly when it informs practice. I spend a lot of time with
students attempting to redefine failure as a natural part of the creative process—not always pleasant, to be sure, but not an experience that should be feared, and certainly not an experience that
should inspire shame.

What was your writing routine while working on the novel?

I was working forty hours a week in an office while writing this book, and so my routine took shape during whatever spare moments I could find. I would get up a half-hour to an hour early, meet my thousand-word daily standard, then catch the express train to go to work in Manhattan. I often read and revised on my commute. I even chose coats with pockets that would accommodate pens, so I could edit all the more easily while in transit. My weekends were claimed by the novel, as well. Having forty hours a week that essentially belonged to someone else made me possessive
of my own time.

The plot moves at a fast pace but the novel also deals with several difficult and heavy themes. How did you strike a balance between forward motion and thoughtfulness?

Intense revision. No one strikes that balance on the first draft. I try to love the editing process—if you don’t love it, you’ll come to dread it, and that’s no good for the health of your business, if your
business is writing. I knew from the beginning what I wanted this reading experience to feel like. I love novels in which I can stay a while—something built like a house with a lot of little rooms—
and I wanted to write something expansive, with a dynamic structure. Sloughing off all the layers I wrote to make the material fit the form I envisioned took time, and trouble, and excellent beta readers. That reader experience made all the difference. Criticism of that quality is a godsend, and it made my book better to accept it.

What are you working on now?

I’m revolving between three separate novels at the moment. I like to write complete drafts, and then set them aside and let them marinate, so to speak, while I work on something else. I’m between a big family saga centered around a chain of regional discount department stores, and a short horror novel involving a widow whose rural farmhouse is slowly being claimed by forces she does not
understand. The last one involves copious amounts of cats. The more I learn about domesticated cats from my research, the more terrified I am of them.

Finally, what advice do you have for writers who might be working on their first novel?

Remember that writing—that making anything, really—is an act of faith. I don’t think I understood how much an act of faith it was, to commit to projects so large, that will necessitate so much editing and change, when I set out to write professionally. Having faith in your process means, on some level, accepting eventual failures. Failure, however, means you are working and learning. It’s a testament to your growth. It indicates that you had the guts to choose a difficult endeavor for yourself. That understanding with the self will ferry you through difficulty and, on good days, yield results that will surprise you.