Winner of the 2018 Jean Feldman Poetry Prize, Jona Colson’s SAID THROUGH GLASS is a window through which we, as readers, peek into a world of grief, conversations, and daily investigations. His conversational poems weave together themes of loss and perception, taking the personal and making it public.

Dialogue poems like the “Doctor to Patient” series and “Passport Control” take a surrealist approach to human interaction and give readers the sense of eavesdropping on an intimate discussion. Questions like “What are your plans?” and “How did you sleep?” are accompanied by answers that delve into the speakers’ psyche and subvert readers’ expectations.

Often, the responses appear to avoid the questions altogether. The answer to “How long will you be here?” is not a length of time, but rather “It depends on what you consider love? It could be days, or something brief / said through glass . . .” These conversations can only exist in the world of Colson’s collection, where readers are always looking (or listening) in. 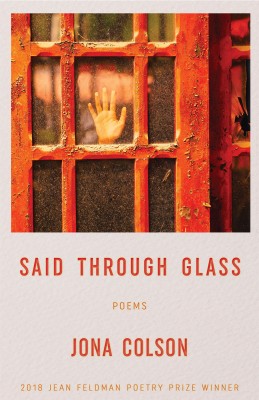 SAID THROUGH GLASS is marked by poems like “From the Wrist and Reaches,” a peaceful reflection of a father. Colson’s speaker is full of grief, but also conveys an overwhelming sense of calm, allowing readers to step into the narrative world of his poems. He writes “It is hard to remember him, / but I can see my father in his quiet August: / a young man, handsome and blue-eyed . . .” The tone is somber, but the measured reflection is tranquil.

The poem “Honey” acts as a microscope with which we investigate the familiar. Colson’s descriptions turn an ordinary drop of honey into something “too thick to understand.” Later, in an imaginative poem “The Orange Speaks,” Colson’s speaker is an orange on a branch, ruminating on being plucked from the tree.

In the third section of the book, Colson offers a poetic re-imagination of Diego Velázquez’ famous painting “Las Meninas,” bringing to life the various “characters” of the painting.

Just as the painting itself has been subject to pages of “spectator” commentary from the likes of cultural theorists Michel Foucault and Anne Carson, readers are turned into spectators as they move through this section. Point of view is the crux of the painting, and as each poem introduces a new speaker, we see how these various perspectives are animated outside the world of the art: one child plays hopscotch outside to entertain the princess, another comforts her at night. Each poem is like a new painting unto itself— the language of watching, looking, and observation occupy the foreground of these vignettes.

This “spectacle-as-observation,” to borrow a phrase from Foucault, is a defining factor of Colson’s collection. As he writes in “VI. Don Diego Velázquez,” the sixth poem in this series, “Every point in space is crucial, the relationships / between the subject and the sound . . .” Colson’s lively ekphrastic poems tie the entire collection together.

Poem after poem, the reader is charged with the active role of looking—just as the title suggests these poems can be something “said through glass,” it also invokes the act of observing through glass, be it a window or a microscope or even the frame of a painting.