Something to Say by Alex MacLennan 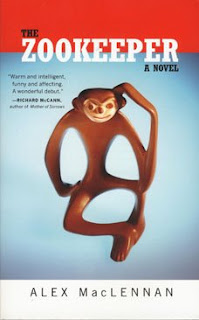 This article first appeared in the fall issue of The Carousel. Alex MacLennan will read at the Writer’s Center this Sunday at 2pm.

My story, though it embarrasses me to claim it in this way, is a story of success. In the years since I stepped into my first course at The Writer’s Center, I completed an M.F.A. in Fiction at American University, took second place in a local writing contest, sold my first novel a week before receiving my M.F.A., and watched that novel, named The Zookeeper, accrue nominations for a number of awards. Easy, right? A veritable piece of cake?

The reality, of course, is far different. The road to that first novel, and the road since, has been far scarier than I’d ever imagined they would be.

In February 2001, after a few months furtively scribbling my way through creative writing ‘how-to” books, I took an introductory fiction course at The Writer’s Center. Walking through those doors felt like crossing a dangerous threshold. I hadn’t written seriously since high school and college. I still read voraciously, but finishing a satisfying novel left me melancholy more often than inspired. I knew I wanted to write something. I knew I had the ability to string words together on the page.

But I was worried—terrified, really —that I’d have nothing to say. See, I come to writing from a love of language, and a true fear of storytelling. I had no trove of plots and characters, settings, and resolutions on which to draw. Entering the space of The Writer’s Center terrified me. I felt as if I might be exposed as a fraud.

Instead, the exercises I did in that class helped me find my story. Stories, actually. One novel down, another well underway, a hundred tales started and discarded and—many—taken up again. Now, I have a treasure chest of ideas to fall back on when inspiration refuses to strike. Now, I know that if I sit long enough, and stare down the blank screen often enough, a story will come. Now, I recognize that when the brooding storm of anxiety behind my eyes becomes overpowering, it often means a story is about to breach. And that knowledge, equal to any publication, is how I’ve come to define success.

Thankfully, it’s not based entirely on accolades or book sales.

See, about ten years ago at a Hollywood party on a hill, I spent a long ten minutes half-flirting with a handsome boy as he described in detail the financial implications of the commercial he’d just “booked.” Apparently, a single national commercial earned him over $30,000—nearly my annual salary at the time. I was jealous, awestruck, and full of congratulations. He stopped me, however, to clarify. The commercial, he explained, was just a stepping-stone. He wouldn’t be happy until he “was” Brad Pitt. I was dumbstruck. If “Brad Pitt” was the only measure of success for an actor, how should an aspiring writer define the word? Are Joan Didion and Michael Cunningham the only appropriate literary measures of success? What about Philip Roth? Amy Tan? Must I sell as many copies as Ann Patchett’s Bel Canto to consider myself a success?

I needed another measure, and set about creating one. What if, rather than assuming success required blockbuster sales numbers, I relished each small victory as it came? Thrilling to a paragraph that rang with beauty or truth. Relishing the act of finishing a story and seeing it published. Writing one essay. Completing a single novel and finding it a small, niche publishing house to call home. My mantra, however trite, was that I didn’t need to be Brad Pitt to call myself a success. And that’s been a very good thing.

Today, I’ve received congratulatory and appreciative e-mails from readers across the US, Canada, Belgium, Italy, Australia, and Wales. I’ve given readings to small groups across the northeast and California. I’ve sat for interviews and photo shoots and have spoken at The Writer’s Center, American University (my alma mater), and the Association of Writers and Writing Programs (AWP.)

Finally, just two months ago, a gay American teenager from a red-state American small town wrote to say he’d found The Zookeeper and that he had “always wanted to read about someone like” the novel’s main character, Sam.

So yes, I guess I can call myself a success, no matter how many copies the novel actually sold, and no matter how terrified I may be that this new novel isn’t strong enough to find its way. I’m not in any way where I dreamt I’d be all those years ago, but it feels absolutely wonderful to be where I am. Of course, some things stay the same. Every time I walk out onto the precipice of a new story, I’m still terrified that I’ll have nothing to say.