Building a World: A review of Rion Amilcar Scott’s The World Doesn’t Require You 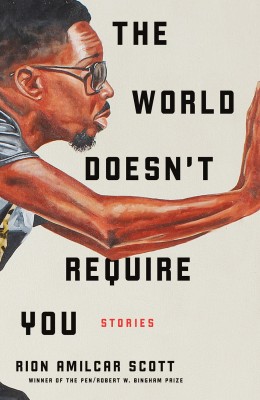 Rion Amilcar Scott set his 2017 debut collection Insurrections, which won the PEN/Robert A. Bingham Award for Debut Fiction, in the fictionalized town of Cross River, Maryland. Scott’s latest book, The World Doesn’t Require You, due out this August from Liveright, revisits that setting with a dazzling collection that includes eleven short stories and a complete novella; some of the stories appeared previously in publications such as Bartleby Snopes, Midnight Breakfast, and Barrelhouse, among others.

In a recent interview, Scott said of his Cross River world that he’d spent more time imagining it this time around; that time was clearly well spent. While the Cross River of Insurrections served as an effective, believable setting, in The World Doesn’t Require You, Scott breathes this world, the site of the only successful slave revolt in US history, to extravagant life, just as thoroughly as Tolkien did his Middle Earth.

Each of Scott’s stories provides another fragment of the town’s rich, detailed history: it has its own literary canon, its own mythology, its own music—even, at times, its own language. But Scott’s skill in fully realizing Cross River lies in more than a generous supply of details; it’s also in the way he infuses them into each story, blending them with “real” history and literary canon, as well as in the structure of the book as a whole.

For example, “David Sherman, the Last Son of God,” the first story in the collection, reads initially as Sherman’s quest to find himself and his God/Father through music; it does well as a standalone with a beautiful, open ending. But several stories later, in “The Temple of Practical Arts,” the reader learns the music Sherman sought in the earlier story has now become religion, salvation, and Sherman is the deity.

Scott’s masterful use of this technique throughout the collection, telling one character’s story and then doubling back to it as established history or canon in another, is part of what makes Cross River feel so very real. But just in case the reader somehow missed it, Scott provides a deliciously meta reminder of how he accomplishes this feat in Special Topics in Loneliness Studies:

“After all, I’m so Cross River it feels as if I’ve made it all up. Every inch of it. From the cracks on the sidewalks of Angela Street to the feet walking over those cracks to the stray dogs in the Wildlands being confused for wolves to every single ripple bobbing across the Cross River. I even created the sunlight sprinkled across those ripples when the sun sinks into the waters in the early evening. And the sun, I created that too.”

Although Scott’s capacity for world building approaches the Tolkien-esque, any further comparison must end there. Tolkien used his world of dragons and hobbits and returning kings to tell lofty, soaring tales of heroism and self-sacrifice (yes, it was also a clear rejection of fascism).

By contrast, Scott’s Cross River—though infused with supernatural elements, like “waterwomen, mystical shape-shifting water creatures who live on an island beneath the water of the Cross River” and, in “A Loudness of Screechers,” massive birds that snatch a ritual human sacrifice from a terrified family—is unsparingly grounded in the grim realities of racism and slavery, state brutality and random violence, misogyny and madness, and, in the wrenching novella, Special Topics in Loneliness Studies, in the desolation of a man doomed by his growing inability to connect emotionally.

Scott holds nothing back in this collection. His language ranges from raw and brutal to scathingly contemptuous (particularly of academia), from heart-breakingly beautiful to wickedly funny. A few examples:

II. COURSE DESCRIPTION:
First, this is a writing intensive course. If that is a problem for you there are plenty of other professors in this department who will award you an A grade for making power ballads, Play-Doh sculptures, YouTube videos, and the like as your primary coursework. – Special Topics in Loneliness
Studies

He ruined us. Transformed us all from little symphonies into the faded plucks beneath the bleeding fingers of God the spent guitarist. The last thumps in the dying heart of God. – “The Temple of Practical Arts”

In my memories, Loretta turns to white dust mid-sentence and blows away, leaving behind the sweet scent of gardenias in bloom. And that’s how she left me. – “Numbers”

Art’s not capable of banging the dents out of the world, man, or creating the sort of… um…accumulated hurt they want it to, and they’ll abandon it for politics or psychology or mass murder. Watch. It’s all the same thing to them, really. – “Slim in Hell”

Scott doesn’t stint with his technical feats of wonder, either, particularly in the novella, a dizzying display of craft that includes photos, partially-redacted intra-office emails, a PowerPoint presentation, authoritative-yet-disturbing footnotes, and a Matryoshka doll’s worth of nested narratives.

Most significantly, Scott doesn’t pull any emotional punches for the reader: sorrow, terror, love, hate, lust, shame, anger, pride, envy, despair, self-loathing—each takes center stage at one point or another in this often unsettling roller coaster ride. But each is also absolutely necessary for a literary work to succeed as a clear-eyed, unfiltered study of the best and worst aspects of the human condition. Succeed? The World Doesn’t Require You does just that—and so much more.