To celebrate the Fall/Winter 2017 issue of Poet Lore, available to order from The Writer’s Center e-store, the Poet Lore editorial staff is spotlighting the work of contributors. This installment is one in a series of Q&amp;As with contributors, conducted by Managing Editor Sarah Katz. 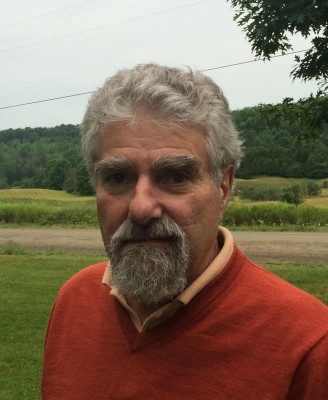 It was the year the swallows nested in the eaves
making a racket, the year the gopher snake
glided up the tree straight as a rod.

There was no guessing what we’d see next,
scorpions under a black light,
javelinas clattering on the front porch.

The city seemed like a sepia photograph
we’d left behind, the drizzly streets full of traffic,
the subway vents ghosting their plumes of steam.

It was monsoon season, season of promise
for the high desert ranches, dust-ridden
and parched through the year-long drought
and every foreclosure sign we passed
along abandoned fields and homesteads
made us think twice of our romance
with wide open spaces, fences unraveled,
doors hammered shut.

Nights were onyx-black, star-stunned
in a way that made the darkness
almost companionable.

The day before, we’d found a migrant woman
lying half-conscious by the Pedregosa foothills,
eyes glazed, body unable to take water,
and soon the ambulance we’d called for
carted her away to who knows where,
and we wondered what kind of life
we were supposed to live.

Sometimes we drew our blinds against the dark.
Sometimes we thought we heard gunshots,
or was it thunder, or the sonic booms from F-16s
training along the borderland,
jolting us to alertness.

There was nothing to do but breathe in the wind.
It was a matter of keeping still,
watching rain clouds drift over the Chiricahuas
hoping they’d veer our way, a matter of
walking through the tall brown grass
thinking greenness was an extravagance
we remembered touching.

We were looking at the horses in the neighboring fields
suddenly galloping together, delirious,
raising great sheaves of dust.

We were looking at the full moon rising
between the mountains, and the sun
flaring just above the opposite horizon.

We were tourists in a land that took our breath away.
How could we ever live
within this stark communion of things,
and how could we not?

We were sitting on the porch
trying to identify the many birds
that flashed their iridescent colors,
and we were wondering about the mountain lion
someone had seen prowling in the far fields,
the half-gnawed deer it had buried
for another reaping.

Now two strangers were coming up the road,
worn as if they’d crossed over the mountains,
calling out, We mean no harm,
wanting only to find the apple orchards
where there was work.

Something for the journey, we said,
and watched them walk away with food and water
into the almost dark where people
kept appearing and disappearing
and the beautiful and raw
took turns mounting their spectacles.

It was night and the stars began to emerge
one by one as if they had waited all year
to show themselves, and the desert voices
began to carry toward us unobstructed.

We walked out into the darkness
to feel it better, hardly seeing
where we were stepping, everything
depending now on what we knew
or thought we knew—or what
we were willing to risk.

Sarah Katz: “Traveling into Deeper Country,” which opens the Fall/Winter 2017 issue, is a profound narrative poem about ‘a year’ when a monsoon has its bull’s eye on the parched wilderness that is Conchise County, Arizona. It is made up of sixteen stanzas of three to eight lines, and the tone is of wonder and amazement, as in the following stanza:

It was monsoon season, season of promise

for the high desert ranches, dust-ridden

and parched through the long-year drought

along abandoned fields and homesteads

made us think twice of our romance

Alongside the beauty of the present expressed in that stanza and in others, there is a portentous unknown depicted by the “migrant woman / lying half-conscious by the Peregosa foothills, eyes glazed, body unable to take water” in the sixth stanza, and the possible “gunshots / or was it thunder, or the sonic booms from F-16s, / training along the borderland, / jolting us to alertness.”

In the final stanza, we see a resolution between these two competing forces:

We walked out into the darkness

to feel it better, hardly seeing

where we were stepping, everything

depending now on what we knew

or thought we knew—or what

we were willing to risk.

I’m interested in your decision to vary the lengths of the stanzas. The poem opens with three-line stanzas, but then, after that, they fluctuate, returning, at times to the three-line format. What was the thinking behind this strategy? How does the variance in stanza length affect our reading of the poem?

Gregory Djanikian: Especially with longer poems, my inclination is to write in stanzas of irregular length. It’s not a conscious effort on my part. It’s very much like breathing for me: sometimes I take short breaths; other times, when the narrative or extended image takes me along, when I spiral into a particular movement or thought, I breathe more deeply, for a longer time. The stanzas for me are a kind of notation (as line lengths and line breaks are) of how the overall rhythm of the poem should proceed, and, in this specific poem, how comfortable the speaker is with the landscape, or how hesitant he is to enter it wholeheartedly. The shorter stanzas, the tercets, convey for me a sense of tentativeness, aperçus on the speaker’s part that describe some part of the landscape though keep it slightly at bay because of their brevity. The longer stanzas suggest the speaker’s willingness to move into and connect with place, forbidding as it sometimes may be, attracted to it by its stunning and intense presence.

GREGORY DJANIKIAN’s most recent book of poetry, his sixth from Carnegie Mellon University Press, is Dear Gravity. His work has appeared or is forthcoming in Boulevard, Cortland Review, The New Criterion, New Ohio Review, Poetry Northwest, and Tampa Review. He teaches at the University of Pennsylvania.

Dear Gravity is available for purchase at Amazon.