Emily Holland is the current managing editor of Poet Lore, the oldest poetry journal in the country. She graduated from George Washington University where she received a BA in English and Creative Writing, and is currently pursuing her MFA at American University. Her poems have been nominated for Best of Net and two Pushcart Prizes. In the interview below, she talks about her debut chapbook, Lineage, which is coming out this month with Dancing Girl Press. 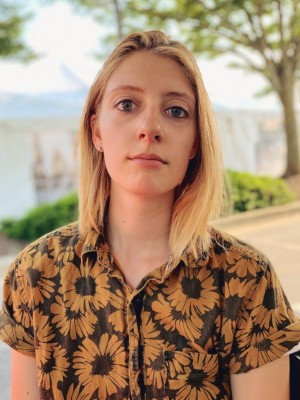 Nina Holtz: First of all, congratulations on publishing your first chapbook! Your poems have previously been published in several literary journals such as Impossible Archetype, Screen Door Review, and Folio. How is viewing your poems as a complete collection a different experience?

Emily Holland: Thank you! It is definitely exciting, to say the least, to have this thing that started out as an idea actually coming out into the world as a physical object. The act of putting them together in a collection is so different than how I viewed my poems as I was writing them on their own. It really took someone to look at some poems that I sent them and go “Oh, there’s common themes here, you should do a chapbook.” It was never something I knew much about or even thought about doing before.

When I started choosing the poems, I really looked through my entire portfolio, which included my undergraduate thesis and whatever new poems I’d written since then, and tried to hone in on a theme that could unite the ones I really liked. Some of the poems I hated, so those obviously didn’t make it into the chapbook. Actually, many of the poems for the chapbook were written in response to the idea of creating a chapbook. I had changed so much as a writer from what my old poetry reflected that I really needed to write new material. Thankfully, I had spaces like the Juniper Summer Writing Institute and Barrelhouse Writer Camp that gave me the tools I needed to write the poems the chapbook needed.

In addition to your writing, you’re also the managing editor of Poet Lore. Has reading and editing others’ poems through the magazine changed your own writing?

I think that every writer should be at least a reader for a literary journal at some point, just like everyone should work in the service industry at some point. It is such an invaluable experience, honestly. When I read submissions, I learn how, perhaps, other editors would read my own submission, so it’s definitely helped me in determining how I write my cover letters or how I determine which poem I put first in my submission packet. My advice: always put the strongest first, that way your reader doesn’t write off the rest of your work. Reading and writing go hand in hand; even if I read something I don’t necessarily like, I learn something about myself in the process. Everything is so subjective. With editing, I always make sure that anything I say is taken as a suggestion – at the end of the day, it is not my poem, so those artistic suggestions that I could make might be in complete contrast to what the writer actually wants to do. And that’s ok.

What/who are your biggest inspirations?

Your poems frequently deal with themes of queerness. How has your experience as a member of the LGBTQ+ community influenced your writing?

I didn’t really become the poet I was supposed to be until I came to terms with my queer identity. That didn’t happen for me until my senior year of college. I was writing poems before, sure, and questioning my identity, sure, but something really clicked when I settled in to who I am and allowed the truest form of myself to come out (no pun intended) on the page. The speakers of my poems prior to that moment are hesitant or distant, not fully realized. And, of course, the narratives track typical heteronormative relationships and themes. I remember one assignment from my first year of college: I had was to write an ode, a love poem, to a celebrity. And I chose Bradley Cooper, not because I felt any particular attachment to him, but because it was the easiest way to continue to pass as straight in my class, or at the very least, to continue to not have to have those types of identity questions brought in workshop. It was probably the worst poem I’ve ever written. Because there was no real truth to it. Poems don’t have to be true, of course, but I think if the emotional core of the poem is fake, it is easy to see through. So now I’m much more sure of myself and my identity as a person and an artist.

The chapbook itself tracks this idea of lineage as something passed down – traditions, literal genealogy, etc. But I’m also looking at this idea of queer lineage and what is (or isn’t) passed between queer generations. That forces my poems to carry a certain weight for me when I’m writing them. I won’t give away everything in the chapbook, but there are certainly poems that are lesbian-focused – coming out poems, elegies, love poems. 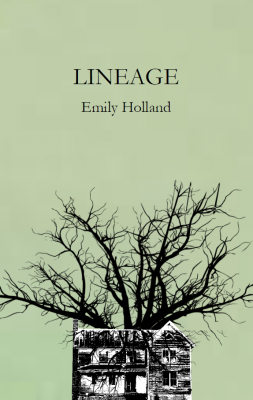 Your writing, and your chapbook Lineage in particular, often investigate the Southern pastoral. Can you explain in your own words what the “Southern pastoral” means to you?

Oh the South! With a capital S! I love writing about where I grew up, in North Carolina, because it is such a fluid place, and yet, so stuck in time in my memories of my childhood there. Every time I visit, something has changed. But those traditions and those stories will always be there. Of course, the South is a place of great trauma, slow recovery, and stereotypes that we see weaponized all over social media now. What I hope to do with my poems is highlight a common truth of my experience growing up there. Pastoral poems investigate or highlight the rural, rustic life in an idealized way. By focusing on the South, and sort of turning the pastoral on its head a bit, I hope to present some of the raw truth of life in the middle of corn fields and farms and on the edge of a sprawling urban landscape.

What is your writing process like? Do you sit down and write a poem all at once, or do you go back and revisit it over a long period of time? Or something in between?

Oh this is so hard! Sometimes, rarely, a poem will come pretty much fully-formed. That was the case with Geophagia. And it took me five years to actually place it in a publication – I submitted it hundreds of times and never made a single change because I believed in it that much. I guess it paid off. But most of my poems start with either one line or phrase or an image, and then I build them out from there. When I feel done, I stop and put it away for a few days so I can sort of forget the mental space I was in when I was first writing the poem. Then I go back to it and edit like crazy. Sometimes deleting the entire poem except for that first thought. Rewriting, reformatting. And then, once I’ve polished it up, I send it out to my poet friends who can see the things that I can’t see because I am too close to the poem. I wouldn’t have any good poems if it wasn’t for my peers and their amazing edits.

Do you have any projects you’re working on now or would like to work on next?

I kind of took a little break from poetry for a while because I am starting my MFA in the fall and I didn’t want to be tired of writing poems before I’d even begun! So I have a little creative nonfiction piece that I’m polishing up now which was born one day during Jaimi Attenberg’s #1000wordsofsummer challenges. I’m not sure if I like it or not yet, but hopefully I’ll get something out of it that I can send out somewhere!