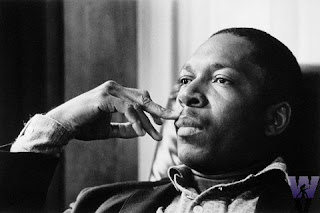 Something happened to me the between Christmas and New Years. I felt a lot like John Coltrane must have felt in the photo above. Like many “good” writers I planned to get some work done making my spiked egg nog all the merrier. The truth is I couldn’t muster one word in my journal. And, I didn’t feel not one iota guilty. I think I may have sighed once at my green notebook staring at me from across the room

I’ve never been a New Year’s resolutions type. They tend to fade as quick as you make them which begs the question are they really resolutions? Surely, if something is important enough to resolve to do, why wait until New Years? One thing, I’ve decided to do is stop writing so much. Yes, I know this sounds counterintuitive but hear me out. There’s a very seductive lifestyle that writers build around themselves. After a while, all of the readings, book signings, book club meetings, and open mics start to substitute for actual writing and more important reading. There’s about a thousand reading series in the D.C area. With all of the many contests, deadlines and whatnot, after a while you start down this path of writing for the industry of writing and not so much for why you started writing in the first place.

I don’t know about you but writing for me happened first as a reader. I absolutely could not imagine not having something to read on my way to school or between classes or even just a companion to brave the quiet with. Then, one day I realized that I was consumed with the things I read, the ideas, the new ways of viewing the self and the world that this new self inhabited. Writing was about learning about myself and the world. It was about trying to create a beautiful creature that others could play with inside their minds. It was about secret ecstasies that only other readers and writers knew about. Yes, it was about participating into a world that seemed exclusive.

That place seems so far away these days. Writing should happen because it must exist. The novelist Toni Morrison talks about how the story she wanted to read didn’t exist so she wrote it. I like this thinking. In a world of billions, it takes a single person to give validity to a reality that billions know about. Don’t get me wrong. Recognition is really nice. But, I feel like I need to do much more reading. Make sure that my work is growing. Am I taking risks? It’s kind of like the actor who plays himself in every film. I don’t want to be that writer that simply talks about the same subject in every poem, every essay, every story.

Until then, I’m slowing my pen.