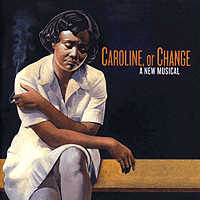 Caroline or Change is a dazzling musical written by Tony Kushner in its final weeks at Baltimore’s Centerstage. Set in Louisiana in1963, amid the recent assassination of President Kennedy, the bourgeoning Civil Rights Movement, and the widespread “change” in ideas about what direction the nation ought to go in. The story revolves around Caroline, a black woman working as a maid for a Jewish Family. She works in the basement where the heat is overwhelming.

Caroline raises important questions about class, the possibility of mobility, and the racial tension between Jewish and Black Americans. Most of the scenes show Caroline working in the literal and figurative “basement,” the ground floor of the house and society. There were portions of Caroline’s character that echoes Ruth from the classic Lorraine Hansberry play of the 1950s A Raisin in the Sun.

In a big way, the music made the show. Only a special mind could have imagined such a spectacle. Many of the songs were poignant and memorable. And the set design was stunning.

Yet still, the subject matter was undermined by all of the shiny dresses and flashing lights. Any student of theater will tell you that conflict is the stuff of great theater. Is there a way for a musical to serve the text while being entertaining? Does the world of theater have to be divided between serious straight plays and the musical?