Chances are you’ve already seen some of Zach Powers’s work in one of our emails or on Facebook and Twitter. He started 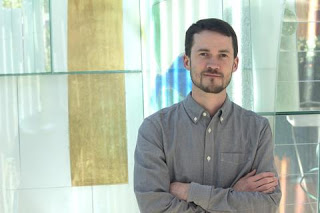 helping us out at The Writer’s Center at the beginning of the year and came on full-time this month. Zach is a seasoned media specialist with 15 years of experience, including many years working with nonprofits. He’s also an accomplished author of literary fiction, including an award-winning short story collection (Gravity Changes, BOA Editions, 2017) and a novel, First Cosmic Velocity, forthcoming from Putnam/Penguin.

We asked Zach a few questions so he could introduce himself to The Writer’s Center family.

TWC: We’re all writers here, so let’s start with that. Can you tell us a little about what you write? 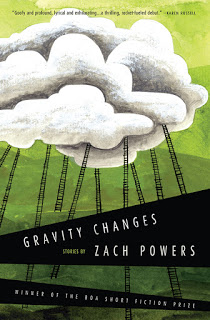 ZP: I usually call it “weird literary fiction.” My first book is full of stories that borrow speculative elements from genre fiction, or have premises that upend reality in some way. I love fiction that uses absurdity as a lens through which to view the more mundane aspects of existence. Haruki Murakami, another writer of the weird, was one of my first and greatest influence, as well as Aimee Bender, Karen Russell, and Italo Calvino. I could of course keep listing similar influences. My novel is a little more straightforward than my stories, but it still has a sort of existential strangeness. In short, I hope I write stuff that some people will love but will make others say “what the heck?”

TWC: You didn’t start out in either in writing or media. How did you end up at this point?

ZP: I actually studied music in college. After graduating with no practical job skills, I took an entry-level position at a TV station in my hometown, Savannah, Georgia. I worked my way up from there, and stayed in TV for nearly a decade. I started writing seriously on the side, and eventually got my MFA and started publishing. I was a little disappointed in the writing community in Savannah, so I co-founded a literary arts nonprofit called Seersucker Live. The organization hosted readings and events, featuring well over a hundred national, regional, and local authors. I also led the writers’ workshop at the Flannery O’Connor Childhood Home, where I served on the board of directors. I was looking for a similar literary community when I moved to the DC area, and that’s how I ended up here at The Writer’s Center.

TWC: What other nonprofits have you worked with?

ZP: After I left the television industry, I worked at Savannah’s Telfair Museums, the oldest public art museum in the South. I was the digital communications coordinator, and worked in a small marketing department. I love visual art, and it was great to be behind the scenes, helping exhibitions come together. I also served as a volunteer with Deep Center, teaching creative writing to middle and high school students.

ZP: That’s right! I taught composition and creative writing at University of South Carolina Beaufort, and I currently teach classes at Northern Virginia Community College. I like sharing my love of writing with students. That’s one of the reasons it’s been so exciting working at The Writer’s Center. I’m also looking forward to becoming more involved with the DC literary community, and I know The Writer’s Center puts me right in the middle of things.

You can learn more about Zach and his writing at ZachPowers.com.