The Writer’s Center’s Zach Powers chatted with bestselling author Kristen Arnett ahead of her appearance at DC’s 2019 OutWrite Literary Festival. 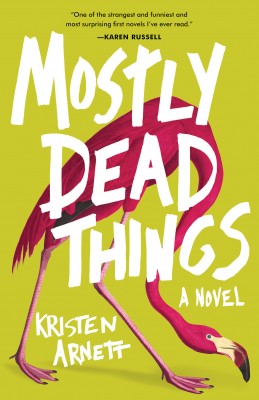 Zach Powers: Since we arranged this interview, your novel MOSTLY DEAD THINGS has totally blown up. Congrats on being a New York Times bestseller! How have your expectations of publication aligned with reality?

Kristen Arnett: I have to admit that I did not expect any of this—truly my expectations for publication were only that I would be able to publish this book and hoped that people would see the things I was trying to build in the narrative. I mostly was concerned with writing about the day-to-day operations of queerness and also with writing about a Florida that felt authentic to me. So my expectations were that I would hopefully find an audience who was looking to read that kind of book. I am so happy and feel very lucky and great that it’s gone over as well as it has. Never in my life did I anticipate that I’d be able to say it was a New York Times bestselling book, but I am so grateful that it is! I am glad that such a broad collection of different kinds of people have wanted to embrace the things I’m trying to write about.

Do you have any thoughts on why this novel has been so well received?

I really worked hard to make it a version of Florida that felt special and personal to me, so I hope that this is maybe the reason why. Lots of the feedback I’ve received from readers has been about the home I am trying to create (an authentic, real Florida outside of the general wacky narrative people come up with regarding Florida Man, etc.) and also about the queerness I wanted to see in fiction. As a reader, I am constantly looking for stories that aren’t centered on queerness as coming out stories. I am looking to read narratives where it’s embedded in the day-to-day interactions that happen in a household, or at a job, or between friends, or just in relationships and inside families. Readers seem to want this, too, and it’s been so wonderful hearing from those people.

I’d like to give a shout out to editors! You worked with Tony Perez at Tin House. Did the novel evolve with his input? What’s your biggest takeaway from the professional editorial process?

I absolutely love my team over at Tin House. They took very good care of me and the book, for sure. When I decided to go with them, I had a long conversation with Tony about where we might tweak the book and ideas that he had for how I might work on some parts that needed just a little fleshing out. We worked very closely on all of this and it was helpful to have such good eyes looking over it. I would say that we went through the book twice together—the first go around for sticky plot points and the second time just as clean up, and then we gave it over to the copy editor. Some people when they get a publisher might need more work and some need less. The book luckily didn’t need too much strong editorial work, so we were able to really sit inside the sentences together and look at how we could coax out a bit more nuance. Probably my biggest takeaway is that there is nothing more important than a good editor when it comes to publishing your work: someone who sees the work and understands it, but also a person who sees your vision and wants to help you make it into the book that you want.

Popular consensus is that you’re quite funny, but I don’t see you dropping one-liners in your work. For me there’s a difference between jokey and absurd, and I definitely see you tackling the latter. Is humor a goal when you write or a natural byproduct of your worldview? Perhaps something else altogether? 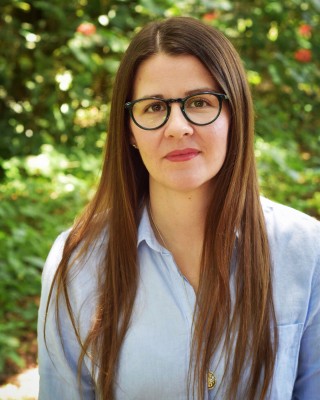 When I think about comedy, I am generally thinking about it in lots of different ways. So many things are funny! There is the absurd, the dumb, the puns—but then there is also humor to be found in darker places, or humor that comes from someone not understanding the joke, maybe. In the novel, I find the most humor in Jessa’s controlling tendencies. It’s funny to watch someone try and control everything around them, including other people, because it’s just something that can’t and won’t ever work out the way you want. She is a character who truly never sees the joke happening around her; she is the straight man, no pun intended, and so when things happen that are absurd it makes it even funnier to look at how she interacts with them because she hardly ever is able to see the joke. I think it’s so great to be able to find humor in so many things. Life is funny and hard and weird and bad and terrible and great all the time, and comedy just sits inside all of these experiences.

I was struck by the novel’s physicality, especially in descriptions of the characters. These are messy, sweaty, fuggy folks. How did you make these characters so tangible? Why was that important to you?

I am forever interested in the body. How it opens, tactile sensations. Taxidermy was a natural conduit for me to express all the physicality that I always want to write about. People are messy! We are messy and occasionally ugly and we are gross and we are also beautiful. Sex is also messy and ugly and beautiful. Sometimes things are bloody. Sometimes we throw up! Sometimes the body breaks down and we work to rebuild it. I am just continually fascinated by how bodies break open and knit back together. I want to write that in characters because that is how I experience the body. All that sweat and mess and heart.

Let’s talk about dysfunctional families! That’s not an uncommon theme in literature, but I found your characters had a unique will toward functionality. How is family both something to be overcome and embraced at the same time?

Families are a lot like the body, too. Very messy! The dynamics in families are forever shifting and attempting to accommodate each other. It’s really hard to know anyone and I think the thing
that’s especially interesting about families is that you’ve generally known those people the longest and there is a tendency to believe that you understand a person because you’ve lived with them and known them so long. That’s when things start to really get messy, that idea that you’ve put a person into a role and when they deviate from it, it shocks you. Families are hard and messy for sure, but they are also full of love and then they are also full of lots of other weird and bad emotions. The dynamic there is continually and eternally so wild. I mean sincerely, does anyone have a FUNCTIONAL family? We all have some kind of baggage there, and that’s what makes families so great to write about.

Finally, can you share a piece of writing advice for aspiring authors?

Just keep working. Even if it’s hard and messy and feels like it’s never gonna get easier. That’s the work, right? Hard and messy. But if it were easy, it probably wouldn’t be anything worthwhile. Stick to the hard stuff.