Traditions Broken: Jericho Brown on his book tour, building a poetry community, and the truth of his art 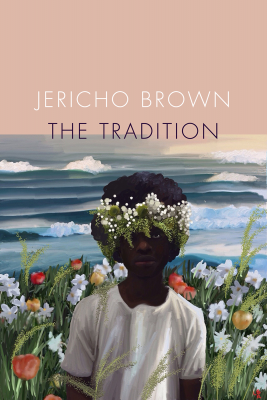 When Jericho Brown’s third book of poetry THE TRADITION (Copper Canyon Press, 2019) launched at AWP this year, to say that there was some excitement would be an understatement. It was madness.

My table for Poet Lore was just a row behind Copper Canyon’s booth and on the day of Brown’s book signing, I could see a line of eager readers stretching far and wide if I peered into the center aisle. Many people waiting were wearing flower crowns, paying homage to the cover image of the book, an Instagram favorite for its muted color palette and striking, young black boy adorned in flowers.

Now, nearly 4 months since that launch, Brown is still on tour, and will be for some time, including a stop here in Washington, DC for the OutWrite LGBTQ literary festival, August 2-4. He’s touring until next April, he tells me over the phone one morning, where he’s chatting from a hotel room in New York.

Spain, Nebraska, Illinois, and Germany have all been on his recently visited list. But it’s not just the jet lag that’s wearing him down: early into his book tour, he broke a toe. And that kept him from doing his burpees, which, he assures me, are integral to his artistic process.

“Part of the reason why it’s so important to me as a poet is because it’s the only time in the world that I literally cannot be thinking about poetry,” he says. “When you’re an artist you’re working all the time. But if you have a weight over your head that’s about to crush your neck and you need to pick it up so it doesn’t, then it’s really hard for you to be thinking about anything else. Working out is just really a way for me to clear my mind.”

Prior to AWP, Brown tweeted a simple hashtag: #AWPBurpeeChallenge. Thousands of writers joined in, posting regularly about their progress and how many burpees they could do in the weeks prior to the literary festival, which had close to 15,000 people in attendance. A community of writers emerged on Twitter, all around an exercise challenge that Brown says started simply as a way to build his own confidence before the large social gathering.

But Brown has always tried to use his platform to bring people together, whether it’s encouraging writers to do burpees or fostering a public conversation among poets.

“I understand now that having a conversation about a poem becomes difficult on Twitter,” he says, “and maybe it’s not where you’re supposed to do that, but then where do people who don’t have the classroom or haven’t had the classroom in a long time, where do they get to do that?”

This sense of community is what, according to Brown, continues to draw people to poetry now, and what drew him to the craft in his early days. 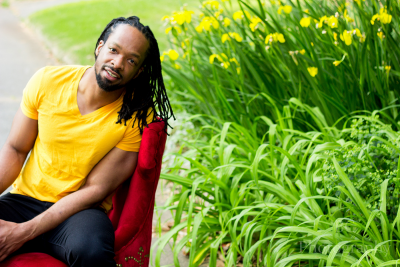 “Every poet I know is running a reading series or running a blog or writing reviews or teaching, or trying,” he says. “I meet poets all the time who are like ‘I think I’m gonna buy this house and turn it into a writers retreat.’ There are these kinds of things that poets are interested in because we are community-minded and I really appreciate that about us and I want to be in on it. I want to be in on that which is the best parts of us.”

The poems of THE TRADITION are captivating because Brown is not writing in a vacuum—he is an active participant in the literary and social traditions of his craft. Brown uses his poems to investigate rape culture, the South, and police brutality, using images of flowers and gardening to carry the weight of the subject matter.

This book, he says, questions everything from the history of English poetry and the violence of Greek mythology to common institutions like marriage and the prison system.

From Petrarchan sonnets and persona poems to new forms like the Golden Shovel and his own creation, the duplex, Brown is not only adding his voice to the community, he’s making his own tradition.

The duplex, he explains, began as an exercise, a challenge to himself to create a form that represented all of his identities as a black, southern, gay man in one space. To do so, he combined the classic forms of the sonnet, the blues poem, and the ghazal, utilizing repetition and rhyme in a formula that has now taken off, with poets writing and submitting their own duplexes to literary
magazines.

And, although there are only a handful of published duplex poems by Brown, both in his book and elsewhere, he realizes that what he started with the duplex is more than a complex form. It is a poetic exercise, and exercises, he says, lead to new poetry.

“You might not get a poem out of the exercise, but you do learn something. Every time you do an exercise you grow. Every time you pick up a 30-pound weight, it’s only so long until you can pick up a 35-pound weight. If your goal is 35, you have to pick up 30 first. So, it feels good to be a part of that and to be able to make a contribution that has caught on in that way.”

At the core of everything that Brown does is his dedication to himself, his truth, and his craft. He acknowledges how lucky he is, as a poet, to have had such well-received books—his first book, PLEASE (New Issues Poetry & Prose, 2009) won the American Book Award and his second, THE NEW TESTAMENT (Copper Canyon Press, 2014) won the Anisfield-Wolf Book Award.

But, he says, he will always be writing his poems for himself and taking risks to tell his truth.

“I have to write these poems to save my own life. I would like to believe that if, indeed, we write the poems that save our lives, then they have no choice but to save someone else’s. If you try to start with saving someone else’s life, you’re going to end up preaching, and I didn’t sign on to be a preacher. I signed on to be a poet, I signed on to cast spells, I signed on to deal with the magic of language and through that language create a new language. That’s what I’m after. Which I think is why my writing is particularly queer. I’m always trying to make the thing new and unexpected and unheard of and yet, suddenly, by its very presence, present.”