From Inner Critic to Publication by Bill Raskin 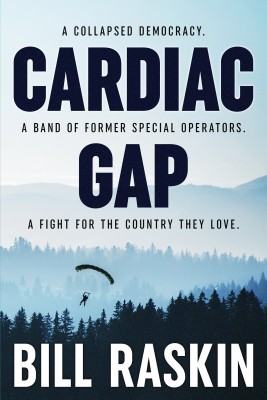 Late February saw the publication of my first novel, CARDIAC GAP. It’s a mixed-genre story that starts with an America facing amplified versions of today’s strife, adds the intrigue of a corrupt power broker, and turns up the heat until dystopian- like fractures emerge. As a retired Army Special Forces officer, I “wrote what I knew” by following several special operations characters who fight to reverse the country’s downward slide.

During twenty years of active military service, I often looked to creative writing and writing for publication as aspirational future goals. It seemed a natural evolution. Deployments to Africa, the Middle East, and other locales brought frenetic operational tempo punctuated with long periods of downtime.

In those quiet times, reading offered a prime mental outlet. A good story gave an escape to somewhere entirely different from the moment. Depending on the book, reading offered relaxation, inspiration, or education. I’ve never lost appreciation for the ability of writing to take us into a new world, shown through the author’s eyes.

When active duty ended several years ago, I began thinking more and more about taking the leap into writing. In late 2015, I announced to our family that I would begin seriously working on this goal. Armed with enthusiasm, determination, a laptop, and supplies, I began exploratory forays in our basement. Here I met the enemy, and he was the inner critic. For the next two years, effort remained stuck in the first three thousand words. Topic after topic, story after story, the inner critic took over and shut things right down. It got pretty demoralizing after a time. Like many DC-area professionals, I wrote thousands and thousands of words throughout my career. Why was creative writing so hard?

Watching this at play, my everloving wife had a suggestion. Why not check out The Writer’s Center? As a fairly recent transplant to Bethesda, I’d never heard of it. In the fall of 2017, I began researching the website in earnest.

In December of that year, a consult session with Kathryn Johnson convinced me that the Center’s resources and her coaching were exactly what I needed. The 2018 writing year opened with participation in Kathryn’s “Extreme Novelist” workshop. She gave our cohort the guidance and confidence to “write forward” toward completion of a manuscript. In this approach, writers must keep moving through their first draft and not go back to edit. While writing forward, we also received lessons to improve our efforts with dialogue, scene setting, and other necessary tools.

I could hear the inner critic in the shadows, ready to pounce at first opportunity. But Kathryn’s coaching kept him at bay long enough to get through each day’s work. Continuing to write forward in the story, there was always one more scene to craft, the next plot point to reach.

By the end of March, I had 55,000 words of a perfectly beautiful – i.e. perfectly ugly – first draft for CARDIAC GAP. The ugly first draft baby gave momentum to keep pressing forward. Late spring and summer saw several more drafts under Kathryn’s tutelage. She had also encouraged our cohort to attend industry conferences, to learn more about the dynamics of modern-day publishing. My wife and I attended Thrillerfest New York in July. It offered an amazing education and cemented my decision to publish independently (i.e. self-publish).

As summer transitioned to fall, the effort progressed to building a wonderful team of freelance support. Copy editors, graphic designers, and formatters all provided expertise and were gracious enough to educate along the way. Friends helped beta-read the middle drafts, and more friends showed up to advance read the final draft. At final count, nine professionals and dozens of volunteer readers helped carry the book across the finish line.

Of course, only readers can determine the merit of this first novel. I am a new writer with much more to learn. I am motivated in the knowledge that there is no end to honing and improving this craft. And I am extremely grateful for the resource that The Writer’s Center provides to our community. As of this writing, I have returned to Kathryn’s winter/spring Extreme Novelist seminar. I am working through ugly first drafts of new short form material. These drafts serve as reconnaissance patrols, searching for the next full-length book project. It is terrifying once more, and that feels great. 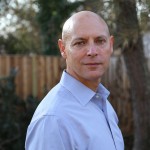 Bill Raskin served as a career Army Special Forces officer, retiring as a Lieutenant Colonel with 20 years on active duty. A native of Dallas, Texas, he now lives in Bethesda, Maryland with his loving wife, a wonderful teen, and an awesome dog. For more information about CARDIAC GAP, visit billraskin.com.