TWC presents a FREE video chat about the craft of writing comics!

We’re joined by award-winning comics writer Ryan North to talk about his new graphic novel adaptation of Kurt Vonnegut’s Slaughterhouse-Five. Ryan will be in conversation with Zach Powers, author of First Cosmic Velocity and Director of Communications at The Writer’s Center.

FREE and open to the public, all times Eastern. Limited space. RSVP below, and you’ll receive an email on or before September 8 with instructions for joining the chat via our video conferencing platform, Zoom.

We encourage you to order a copy of the book from your local comic shop, your favorite independent bookseller, or online from bookshop.org.

Ryan North is the writer responsible for Dinosaur Comics, the Eisner and Harvey award-winning Adventure Time comics, the #1 bestselling anthology series Machine of Death and the New York Times bestselling and Eisner-award winning Unbeatable Squirrel Girl series for Marvel. He’s adapted Kurt Vonnegut’s Slaughterhouse-Five into a graphic novel, turned Shakespeare into NYT-bestselling choose-your-own-path books, and his book How to Invent Everything is nothing less than a complete cheat sheet for civilization. He lives in Toronto, where he once messed up walking his dog so badly it made the news.

About the Graphic Novel 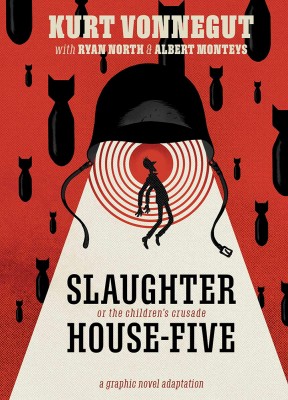 An American classic and one of the world’s seminal antiwar books, Kurt Vonnegut’s Slaughterhouse-Five is faithfully presented in graphic novel form for the first time from Eisner Award-winning writer Ryan North (How to Invent Everything: A Survival Guide for the Stranded Time Traveler) and Eisner Award-nominated artist Albert Monteys (Universe!).

Billy Pilgrim’s journey is at once a farcical look at the horror and tragedy of war where children are placed on the frontlines and die (so it goes), and a moving examination of what it means to be fallibly human.