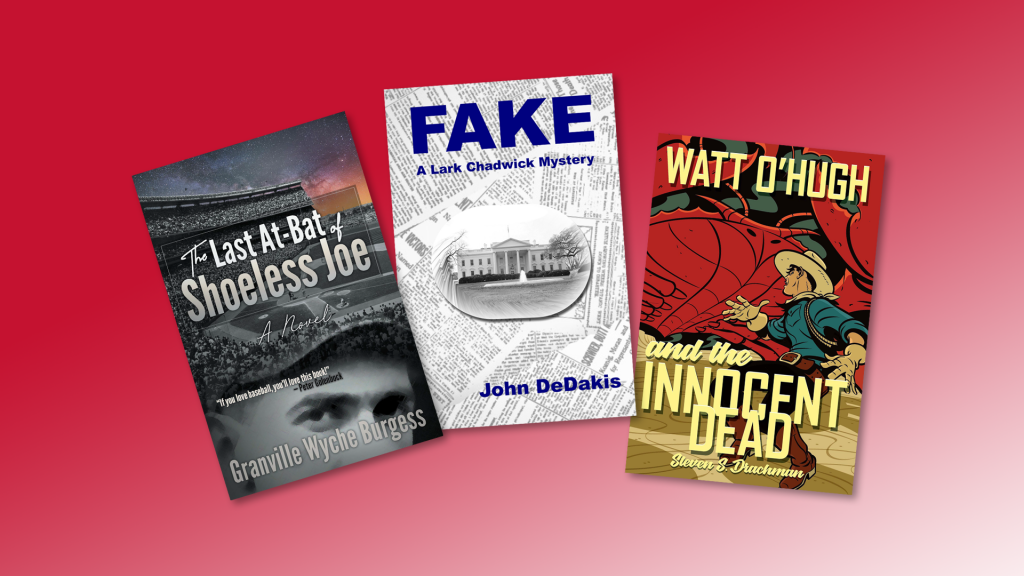 Join The Writer’s Center for an evening of readings featuring TWC instructor John DeDakis and visiting authors Steven S. Drachman and Granville Burgess! FREE and open to the public.

Author, Journalist, Educator, and Writing Coach John DeDakis is a former CNN Senior Copy Editor for the Emmy and Peabody-Award winning news program The Situation Room with Wolf Blitzer. DeDakis is the author of four previous mystery/suspense novels, FAST TRACK, BLUFF, TROUBLED WATER, and BULLET IN THE CHAMBER, winner of Reviewers Choice, Foreword INDIES, and Feathered Quill book awards in 2017. His latest novel FAKE comes out on September 1. About FAKE: In the era of “fake news,” when facts are suspect and reporters are targets, White House Correspondent Lark Chadwick is thrust into the midst of a media-bashing frenzy. FAKE is a real-life look behind the scenes at the ethical struggles of a female journalist in a #MeToo world walking the line between personal feelings and dispassionate objectivity – trying to discern the difference between what’s real . . . and what’s fake.

From award-winning author Steven S. Drachman comes the final volume of the acclaimed, Best Fantasy Novel-winning The Strange and Astounding Memoirs of Watt O’Hugh the Third trilogy, WATT O’HUGH AND THE INNOCENT DEAD. In this final book of the trilogy, Watt O’Hugh, the dead/not-dead, Time Roaming Western gunman, travels the length and breadth of the sixth level of Hell, recruiting a shadowy army that might storm the borders of the Underworld, free humanity and the inscapes from the clutches of the Falsturm and his Sidonian hordes, and stave off the Coming Storm. Kirkus Reviews named the first novel, THE GHOSTS OF WATT O’HUGH, to its list of the best books of the year in 2011, raving, “Fast- paced, energetic and fun; a dime novel for modern intellectuals”; the Boston Phoenix called GHOSTS, a “rip- snorting, mind-boggling novel,” and Nicolle Wallace, New York Times best-selling author and host of MSNBC’s Deadline: White House, called herself “an instant fan.”

Emmy-nominee Granville Wyche Burgess’s musical, Conrack, played to sold-out audiences at Ford’;s Theater. Now he’s introducing his new novel, THE LAST AT-BAT OF SHOELESS JOE, which imagines Shoeless Joe Jackson, the outfielder disgraced in the 1919 “Black Sox” scandal, living in Greenville, South Carolina, and finding redemption in his twilight. New York Post baseball columnist Ken Davidoff calls Joe “a gripping story that is both illuminating and emotional… Great for baseball fans, and even true-crime enthusiasts,” and Booklist writes, “Burgess has a genuine affinity for small-town southern life and portrays Jackson as a complex man who stunted himself emotionally in the aftermath of his banishment … Intriguing!”