TWC presents a FREE VIDEO CHAT about the craft of essay writing!

We’re joined by Washington Post columnist and satirist Alexandra Petri to talk about her new book Nothing Is Wrong and Here Is Why, the importance humor when the world is on fire, and whatever else pops up. Alexandra will be in conversation with Amy Freeman, author, essayist, and Development Director at The Writer’s Center.

RSVP below, and you’ll receive an email on or before September 10 with instructions for joining the chat via our video conferencing platform, Zoom.

We encourage you to order a copy of the book from our friends at Politics & Prose or your local, independent bookseller. 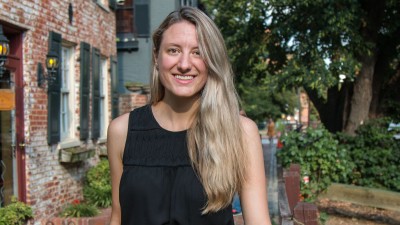 Alexandra Petri is a columnist for the Washington Post. Her satire has also appeared in McSweeney’s and the New Yorker‘s Daily Shouts and Murmurs, in other newspapers (hello, Salt Lake Tribune!), on the radio, and on TV.

She has appeared on a number of podcasts, Wait Wait Don’t Tell Me, and Jeopardy! where she made what was described as the ‘worst final Jeopardy! wager of all time.’ She recently achieved her lifelong dream of being a talking head in a documentary about Benjamin Harrison.

Unlike Benjamin Harrison, Alexandra was on Rolling Stone‘s list of The Funniest People Right Now, Forbes 30 Under 30, received the National Press Club’s Angele Gingras award for humor writing, and won a Shorty Award for her parody twitter account. She is also an O. Henry International pun-off champion—here is her winning routine about presidents.

These impossibly cheerful essays on the routine horrors of the present era explain everything from the resurgence of measles to the fiasco of the presidency.

In Nothing Is Wrong and Here Is Why, acclaimed Washington Post satirist Alexandra Petri offers perfectly logical, reassuring reasons for everything that has happened in recent American politics and culture that will in no way unsettle your worldview. In essays both new and adapted from her viral Post columns, Petri reports that the Trump administration is as competent as it is uncorrupted, white supremacy has never been less rampant, and men have been silenced for too long. Q-Anon makes perfect sense! Perhaps the abyss is staring back at you because your outfit looks extra nice today! At the center of the book is a virtuosic account of the past four years, a history as surreal and deranged as the Trump administration itself. This Panglossian venture into the swampy present will soothe— and terrify— readers who have died laughing to ClickHole, the Onion, Stephen Colbert, Jon Stewart, or Veep.