Connotative Language: It’s Not What You Mean, It’s How You Sound

A few years after the release of the film Titanic, a fiction student of mine wrote a story in which he described the moon as “titanic.” Immediately, I thought of Leonardo DiCaprio howling, “I’m on top of the world!” Not to mention Celine Dion singing “My Heart Will Go On.” Though the student wasn’t intending to call those images to mind, he’d accidentally invoked them.

In first drafts, we often choose words for what Stephen Minot in his book Three Genres would call their denotative meaning, their literal dictionary definition. As we revise, however, it’s important to also consider the connotative uses of language, the associations that words call to mind.

In the case above, while trying to denote “big moon,” the student accidentally invoked a cheesy Hollywood movie, temporarily bumping readers out of his own story. However, as writers we can use this technique purposefully, deliberately choosing words that evoke images, cultural references, and emotions to amplify the power of our work.

Poetry, with its intense focus on language, is tremendously well-suited to the manipulation of words for their connotative effects. One vivid example is Sylvia Plath’s poem “Daddy,” which begins:

“You do not do, you do not do
Any more, black shoe
In which I have lived like a foot
For thirty years, poor and white,
Barely daring to breathe or
Achoo.”

In claiming to live in a shoe, and in doing so in short, simple language, the speaker of this poem calls to mind this famous bit of childhood verse from Mother Goose:

“There was an old woman who lived in a shoe.
She had so many children, she didn’t know what to do.
She gave them some broth without any bread;
And whipped them all soundly and put them to bed.”

It’s an interesting and complex move. On one hand, this reference to a beloved childhood rhyme draws a bright contrast with the speaker’s unpleasant memories of her father. Yet Plath is also reminding readers of bitter feelings that often lurk not only in childhood experience but also in fairy tales and nursery rhymes in lines like: “Whipped them all soundly.”

Connotative language isn’t only the province of poetry. Prose writers also choose words that go beyond dictionary definitions for their evocative power. Toni Morrison begins her novel The Bluest Eye with the simple language of a childhood reading primer:

“Here is the house. It is green and white. It has a red door. It is very pretty. Here is the family. Mother, Father, Dick, and Jane live in the green-and-white house. They are very happy.”

Immediately after this introductory section, Morrison presents the more complex and tragic world of her characters with rich textured language:

“Quiet as it’s kept, there were no marigolds in the fall of 1941. We thought, at the time, that it was because Pecola was having her father’s baby that the marigolds did not want to grow.”

The collision between these two language styles highlights how the novel’s African-American characters are constantly exposed to the bland sanitized world of White myths like Dick and Jane stories that fail to capture the reality of Black lives. As the book proceeds, Morrison’s use of language shows readers that as young Pecola faces her father’s abuse, she does so in the long shadow of a dominant cultural narrative that deepens her pain.

Both Plath and Morrison are using a stylistic device known as intertextuality, meaning that they’re using connotative language to allude to other stories. However, another way to work with connotative language is by choosing words, idioms, and metaphors that create connections to a story’s larger themes. One example is E. M. Forster’s novel Howards End, which focuses on class conflicts and personal relationships in pre- World War I England.

“You remember ‘rent’? It was one of father’s words—Rent to the ideal, to his own faith in human nature. You remember how he would trust strangers, and if they fooled him he would say, ‘It’s better to be fooled than to be suspicious.’”

By expressing the intricacies of human relationships in financial terms, Forster shows how our emotional and economic lives are entangled, even if we prefer to pretend otherwise.

Orwell, who famously warns of the dangers of using vague language in “Politics and the English Language,” opens “Marrakech” in his trademark precise and evocative language. While describing a mourners’ procession in Morocco, he gives details like “pomegranates and the taxis and the camels” “wrapped in a piece of rag” “they hack an oblong hole a foot or two deep, dump the body in it and fling over it a little of the dried-up lumpy earth, which is like broken brick.”

Yet in the very next paragraph, Orwell deliberately lapses into uncharacteristically vague language to evoke the perspective of a European colonialist:

“When you walk through a town like this…when you see how the people live, and still more how easily they die, it is always difficult to believe that you are walking among human beings. All colonial empires are in reality founded upon that fact. The people have brown faces—besides there are so many of them! Are they really the same flesh as yourself? Do they even have names? Or are they merely a kind of undifferentiated brown stuff…”

This change in vernacular, from precise seeing to abstract analysis, dramatizes the process of colonialist thinking. Only by dehumanizing other people through a shift in language can imperialists justify their right to occupy those people’s lands.

As a reminder of the falseness of this point of view, Orwell returns to the vernacular of precision at the end of the paragraph:

“Sometimes, out for a walk, as you break your way through the prickly pear, you notice that it is rather bumpy underfoot, and only a certain regularity in the bumps tells you that you are walking over skeletons.”

In other words, death is the great inescapable equalizer of humanity, both colonized and colonizer.

At the beginning of the writing process, we as writers are inclined to use language denotatively because we’re busy trying to block out our story and figure out our subject. Yet during revision, we might carefully examine our word choices to consider what they suggest to readers, even unconsciously.

One place to look for opportunities to use connotative language is by simply searching in our characters’ worlds. Perhaps Plath and Morrison imagined what might be on their characters’ childhood bookshelves. Maybe E. M. Forster was struck by how often his characters worried about money. And perhaps Orwell, while writing about Morocco, noticed the contrast between the lives of local people and the grandiose cant uttered by White tourists on vacation.

The worlds of our stories are alive with poetic possibilities, if we just take the time to notice them. 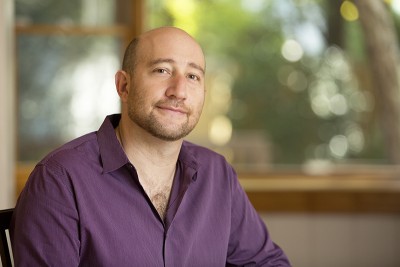 Aaron Hamburger was awarded the Rome Prize by the American Academy of Arts and Letters for his short story collection THE VIEW FROM STALIN’S HEAD (Random House), also nominated for a Violet Quill Award. His novel titled FAITH FOR BEGINNERS (Random House), was nominated for a Lambda Literary Award. His latest book is the novel NIRVANA IS HERE. His writing has appeared in The New York Times, The Washington Post, The Chicago Tribune, Poets & Writers, Tin House, Subtropics, Details, Michigan Quarterly Review, Crazyhorse, Boulevard, O, the Oprah Magazine, and The Village Voice. He has received fellowships from the Edward F. Albee Foundation, the DC Commission on the Arts and Humanities, and the Civitella Ranieri Foundation in Umbria, Italy, as well as residencies from Yaddo and Djerassi. He has also taught writing at Columbia University, NYU, the Stonecoast MFA Program, and the George Washington University.