An interview with Zach Powers about his upcoming novel, FIRST COSMIC VELOCITY

You may know Zach Powers from his work as Director of Communications at The Writer’s Center, but soon you’ll also know him as an author. Powers’ first story collection, Gravity Changes, won the BOA Short Fiction Prize in 2017. His work has been published in journals such as American Short Fiction, Black Warrior Review, The Conium Review and more. Following the success of his short stories, Powers’ debut novel FIRST COSMIC VELOCITY will be coming out this month from Putnam/Penguin.

FIRST COSMIC VELOCITY is set in 1964 Russia, where the Russian space program has been lying to the public for years. Although five capsules have been successfully launched into space, not one has come back. The program has used twins to hide this, sending one twin into space, while the other pretends to have successfully returned back to earth. Powers’ imaginative novel dives deep into issues of identity, loyalty, and family as he creates a universe that is both unfamiliar and strikingly recognizable at once.

In the interview below, he discusses the process of researching, writing, editing, and marketing his novel.

Nina Holtz: So, first I have to ask, Russian twins in space– why?

Zach Powers: The idea just popped into my head one day and took on a life of its own. I think the power of a speculative idea behind a work of fiction is that it pushes a writer’s thinking in new directions. When it comes to telling a character’s personal story, there are only so many basic human experiences, but if you frame those experiences with some weird idea—such as space twins—then the old themes gain new life. So there’s no reason my space twins are special except inasmuch as they’re a device that lets me reexamine an idea like personal identity.

The novel includes both real and fictional history about the Russian space program during the 1960s. How much research did you have to conduct to be comfortable writing about that era? How did you decide the line between what would remain close to truth and what would be fictionalized?

I spent about six months researching the Soviet space program, supplementing that along the way with online research as needed. I think you nailed my approach to research with the word “comfortable.” I research until I feel OK with the subject. Since I’m not a historian, and since I’m deliberately moving away from the historical record, I’m granted a lot of freedom. Still, the Soviet space program has such a rich history, I would have been foolish not to recognize the potential for storytelling already within it.

You’ve said that you’re interested in the absurd and have been influenced by writers like Haruki Murakami. How do you incorporate absurdity into your novel while still maintaining a level of connection with your readers?

I don’t think the absurd things in my fiction are any more absurd than our everyday existence as humans. We’re tiny sacks of self-aware meat on a tiny planet in a tiny solar system in a tiny galaxy in a universe that might as well be infinite. But we want to feel meaning so badly. If existing like this isn’t absurd, what is? So writing absurd things is just a way of grappling with the greater weirdness of life. Put simply, my writing reflects how I think about the world. I’m always looking for new angles and fresh perspectives, and I can’t find those retreading the same ground that’s already been trodden.

As mentioned before, the premise of your novel is a unique one. How do you pitch and market a book that doesn’t fit into a typical genre?

I think my novel actually falls into the ambiguous category of literary fiction. That’s how I pitched it to my agent, and I think that’s how she pitched it to my editor. However, the publisher has focused a little more strongly on its genre elements, alternate history and science fiction. While the book might appeal to the traditional audiences for those genres, I do worry that my more introspective, Murakami-inspired writing style might leave some of them disappointed. The book is not a thriller, after all. But, Murakami was my gateway from sci-fi to literary fiction, and I hope that maybe FIRST COSMIC VELOCITY will serve as a gateway for other readers, as well. That would actually be the coolest thing that could happen, opening up whole new areas of literature to new readers. 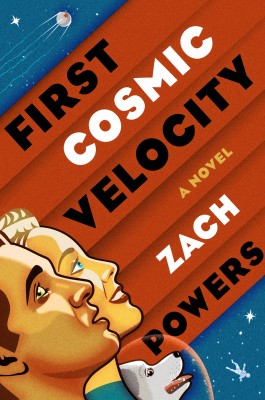 How did you balance working life with writing your novel? What was your routine?

I write every morning before work. Since I’ve been working at The Writer’s Center, that means coming in between 6:30 and 7am and using the writing carrels downstairs. However, I completed this novel long before I moved to the DC area, so the routine for it was a little different. My old job didn’t have a writing space available to me, so I wrote in a coffee shop. That’s where I did all my writing for over fifteen years (don’t ask how much I spent on coffee during that time). There’s no one way to be a writer, but there’s a pretty popular consensus among writers that carving out consistent writing time is important. Once I established my own routine, it feels weird on those rare occasions I have to change it.

What was your editing process like? Did you have to make major changes after the original draft was written?

The first draft always sucks. That’s the truth for every single writer I know. But it’s a really hard lesson to learn for some people to learn. I sometimes wonder if the difference between writers who get published and those who don’t is the willingness they have to recognize deficiencies in their early drafts, and the dedication to revisit a work again and again and again. Event after you’ve got the book in as good a shape as you can, there will still be more revising with your editor and agent. I also think there’s no such thing as a finished draft. Even the book that gets published could be revisited. I’ve been practicing reading chapters of my novel out loud so that I give good performances on my book tour. The downside is that through repeated re-readings, I’ve discovered some things in the published book worth editing. Too late now! Writing is a practice, so the more you write, the better you get, and the less representative of your skill old works will become. I’m a better writer than the person who wrote my novel. I hope I’m always looking back at my old writing and recognizing how it might be improved.

Your novel has been drawing a lot of buzz, including being named a Summer 2019 Barnes and Nobles Discover Great Writers Selection. You’re also going on a book tour! Do you have any advice for aspiring novelists?

There’s no advice that works for everyone, but I do recommend that writers try to separate the act of writing from the process of trying to get published. The writing is valuable in and of itself, so publication is just an external gratification. It’s a really nice gratification, yes, but if you’re only writing to be published, then you’re going to face disappointment more often than not. If it’s the writing that sustains you, though, then you can keep it up for a lifetime.

Purchase FIRST COSMIC VELOCITY from a bookseller near you beginning August 6, 2019.